So apparently today was forecasted to have destructive winds and heavy rain but it has been a beautiful morning for a run. I hauled butt out the door for the 26km run I had been dreading this week (just wasn't really feelin the running this week) and it turned out to be great!

It was windy, yes, but not too bad and actually found the breeze cool and refreshing when I was sweating it out. I also finished before any huge bouts of rain pummelled down on me and it was sunny pretty much the whole time.

Anyway, I know you are dying to hear about the actual run itself so here you go...

The first hour and a half of it was ok (the whole run took me 2 and a half hours total), but then I started to get the ol' attack of the mind going on - little evil dude on one shoulder whispering in my ear 'You're too tired, you're sore, who cares if you don't finish, an hour and a half run is still really good... blah blah blah!'

And just as I was about to go 'evil dude, you are making a good point there' I ran (literally) into one of my running mentors for the Auckland marathon. None other but the true legend herself, Ady! Woop! She really is a running legend and the NICEST and most ENCOURAGING person out btw!
Anyway, she had just started and I still had another hour to go so we joined forces to beat the running game together... And it was great! I'm tellin ya, you NEEEEEEED a running buddy! As this lame little add that I just found on google says: 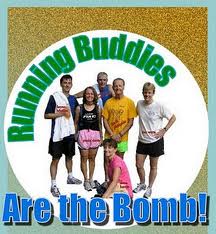 It sums it up perfectly even if it is in a cheesy sort of way. I pretty much did all of my training for the Auckland Marathon by myself (bar a few that I ran with Ady) and thought that I didn't need anyone to run with. However, it's getting a little different now, a little boring and a little lonely. Especially when I know all the words to all 400 or so songs on my iPod... Yikes! So I encourage you to find someone who likes to run, or maybe even someone with the same goal as you, or just someone who wants to help support you in your running to get out and pound the pavement with. It makes the runs go faster (especially those LSDs) and it is just plain nice to have someone alongside to chat to (or not) and to share the running with.

So do you have a running buddy? If so, what do you like about having them run with you? Please do share, would love to hear any stories.

P.S. Now I am enjoying a guilt free relax on the couch and am about to go bake a cake for my Grandad's 85th birthday - which I intend to eat a HUGE piece of BECAUSE I CAN... Suckers!!! Yuss!!
Posted by Curious Runner at 1:21 pm